Winter (indoor) play is in Mary Hall Gym in Selkirk College's 10th St. Campus). Summer (outdoor) play is at LVR (Nelson High School) or Lakeside Park courts. Signup for winter play at this link. No signup is necessary for Lakeside Park. Nelson Pickleball Club membership is separate from membership in the Nelson Tennis Club, which gives you access to the new outdoor courts at the LVR High School, or you can pay a $5 user fee. The (honour system) box is on the outside of the shed beside the tennis courts. Click here for the Nelson Pickleball Club CODE OF CONDUCT and MEMBERSHIP APPLICATION FORM. All members, old and new, need to fill out a membership form, which you can bring with you when playing at Mary Hall. CLUB MEMBERSHIP is $20 for 2021-22 (October 1-September 30), but if you paid membership for 2020, the fee is waived for 2021-22. The fee does not include membership in PCO (Pickleball Canada) or PBC (Pickleball BC) which can be joined separately.

HOW HIGH CAN WE GO? Keith Bridger and Nelson pickleball players in action adding height to a fence at the courts this week. Thanks to all who volunteered.
at August 06, 2022 No comments:

Summer pickleball seems to be going relatively well. There are very few bookings on Hold My Court, probably because most people like to play in the open group times. Pickleball players who have paid their annual dues to the Nelson Tennis Club, please feel free to make private bookings at any available time on Hold My Court.

Regarding the Advanced Open times, some players have commented that they do not appreciate the “hard, fast” shots and occasional aggressiveness at this level of play. In contrast, some of the Advanced players feel that playing with those less skilled, results in a less than satisfactory experience or workout.

To alleviate the problem, on a trial basis starting this Wednesday July 20th, we will use the following system: On advanced days (Mondays Wednesdays and Fridays from 8 to 11) only Advanced players will use court one (nearest the parking lot) and court two. All others will use Court 3.

For Nelson Pickleball players, we consider the following to be minimum skill level for Advanced players:

FOREHAND:Consistently hits with depth and control. Is still perfecting shot selection and timing.

BACKHAND:Has improved stroke mechanics and has moderate success at hitting a backhand consistently.

SERVE / RETURN:Places a high majority of serves/returns with varying depth and speed.

DINK:Increased consistency with moderate ability to control height/depth. May end dink rally too soon due to lack of patience. Is beginning to understand difference between attackable balls and those that are not.

3RD SHOT:Selectively mixing up soft shots with power shots to create an advantage with inconsistent results.

VOLLEY:Able to volley a variety of shots at different speeds. Is developing consistency and control. Starting to understand the block/re-set volley.

STRATEGY:Aware of partner’s position on the court and is able to move as a team. Demonstrates ability to change direction in an offensive manner. Demonstrates a broad knowledge of the rules of the game. Has a moderate number of unforced errors per game. Solid understanding of stacking and when and how it could be used in match play. Beginning to identify opponents weaknesses and attempts to formulate game plan to attack weaknesses. Beginning to seek out more competitive play. 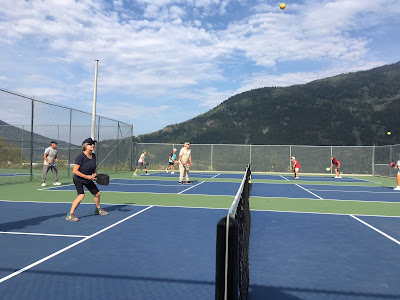 This link is to the system being used for play on the LVR (Nelson High School) courts:
https://holdmycourt.xyz/reserve2/npa
Click the Multi-View button if you want to see several days at once.
If the court is not marked as open, please assume that it is a closed group. You do not need to put the names of ALL the players, just the person who is reserving the court.
If you are asked to enter credit card details, this means you have gone into the advertising area.

Important: Last person off the courts, please lock up.

Janet Henderson is holding pickleball introductory sessions each Saturday in October from 10-12 (weather permitting). There's no cost. Paddle and ball and court time are provided. Please contact Janet  (chocolatejanet@gmail.com) if you are planning on coming.

BC's Restart is a careful, four-step plan focused on protecting people and safely getting life back to normal. Presently we are at "Stage 3".

The latest guidelines from Pickleball BC

The latest from the Government of BC

Directive from Pickleball BC

The following is a letter from Pickleball BC, based on directives from Public Health's Dr. Henry and viaSport:

This week Dr. Bonnie Henry extended all current restrictions through March 16 - at least.

This means - no changes to our play formats, gathering sizes, or travel to play - sport related. Let me reiterate the salient points:The intent is to limit social interaction between areas and groups - limit the opportunity for COVID to spread. Do your part!

It is expected that Clubs that are operating or have play happening in their areas be cognizant and participate with these measures of public COVID safety.

Additional information - the PCO website had some erroneous data and instructions with respect to COVID protocols - I have had that information taken down.

The 'rules' and restrictions for pickleball are not the same as other sports, what they can do we may not be able to - sorry.

Let us ALL do our part to be careful and follow our Provincial orders and guidelines for the long term benefit of us all.

Please do your part.

Join us at Selkirk College's Mary Hall as of October 1 every Tuesday, Thursday and Sunday for a Pickleball rental day. Five courts wil... 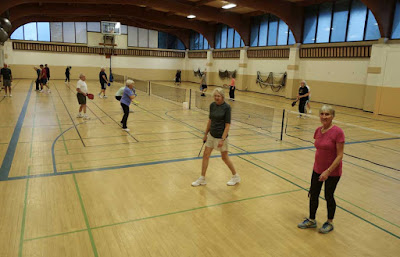 Click on this link to join the Nelson Pickleball Freelist where we arrange games at short notice and pass on other important news and changes to schedules for the rest of the year. You can opt out of Freelists at any time.